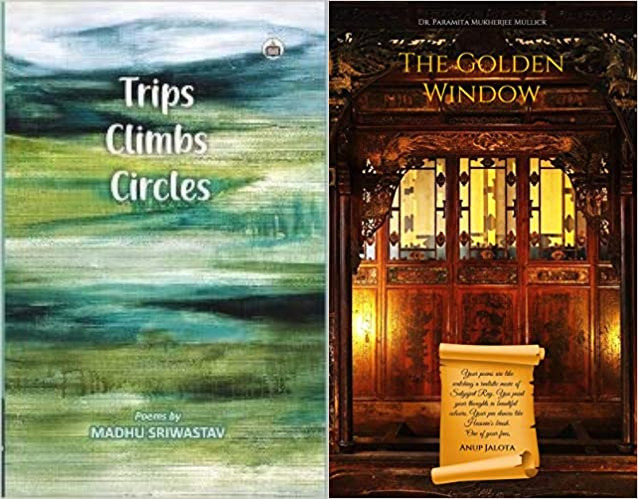 Stuck at home in times of pandemic, one is amazed to see poetry flourishing. Poetry and other creative writing seem to help navigate these difficult, trying times. And this is true of poetry in all Indian languages that flood one’s social media feed. The two volumes under review are similar in that they are both by women poets: Madhu Sriwastav’s Trips Climbs Circles is her debut collection of poems, while Paramita Mukherjee Mullick’s The Golden Window, is her fifth volume of poems. Sriwastav’s was published just before we went into a lockdown that would bring about so many changes to our world; Mullick’s saw the light of day after the lockdown. Both volumes reached my table during the lockdown.

A collection of 60 poems by academic and poet, Madhu Sriwastav, with a name that delights one’s mind, this volume, Trips Climbs Circles, introduces a new voice in Indian Poetry in English. As the Foreword notes, “The poems span a wider trajectory, bridging the urban, the suburban, the rural and the diversity of regional customs, rituals and cultures, as well as the politics of regionalism and linguistic variations.”

“Death of a House” speaks evocatively of a house that is a lived space and holds so much in its confines.

Bit by bit the house was brought down,
raped and mutilated mercilessly
as the insensitive world looked on!

In “Scorned Bride”, Sriwastav foregrounds issues of patriarchy as she uses a character from Hindu mythology, Amba, to speak about it:

Suddenly came in . . . a gush of wind
a chariot fiercely galloped in
there was hue and cry all around
like a flash of lightning
the brides were gone!
all stood agape . . .  princess and king
shocked by the prompt act.

The poems in the volume represent the urban, the suburban, and the rural environs. The gamut rituals, festivals, cultures, and languages create a wide expanse that lingers on. The lines in the poem “Broken Memories” are short and assert the urgency inherent in the poem voicing loss and longing:

“Kolkata” speaks of the city – its sights, scenes, and familiar places as the speaker negotiates the city that was once unfamiliar and is now home:

I travelled and absorbed
My horizons widened . . .
The city became my own

“Snuggled Darkness” conjures childhood memories of being without electricity and of being plunged into darkness. But such darkness becomes a space for nostalgia:

Sriwastav’s poems use images and metaphors that are sincere in their felicity of expression. Experimenting with various themes, the poems evoke myriad experiences of life.

Paramita Mukherjee Mullick’s poems in The Golden Window create an enchanting world that lingers. As the Foreword notes, “Paramita weaves together the mundane and the magical with malice towards none.” Images and ideas coalesce creating a world that is not one of disillusionment, rather one of joy. Divided into five sections – Sky, Forest, River, Land, and Abode – the poems in each section are linked by the poet’s sensibilities. Many of Mukherjee Mullick’s poems provide the date and place of their composition in bracket, thereby giving the poems a more concrete mooring.

“The Little Miracle,” composed during the lockdown, speaks of the stifling times in a changed world:

Just when I thought I could no longer breathe.
A little miracle happened in the form of a seed.

“My Train Ride” uses images and words that wonderfully recreate a train journey in which the calmness of the persona’s mind is contrasted with the commotion of the train: “So much speed but my mind is calm.” Mukherjee Mullick’s poem “The Blue and White City” speaks of the modern-day Kolkata, “the city of my youth”, a city that she had left behind but returns to at times. Despite the monotony of the blue and white, it is a city that is still dear to her, whose “memories” she holds “tight”.

There are poems in the volume that speak of a woman’s identity, her condition in society, and the difficulties she faces. Unlike Sriwastav whose poems have a subtext, Mullick’s poems are much more direct in their expression. In “It is About Time”, she speaks of sexual harassment:

The reiteration of words and phrases in the poem reveals a sense of urgency and the poet’s outrage. “The Lull Before A Storm” wonderfully evokes the sense of an eerie quietness that forebodes danger:

Not a shiver in the leaves, silence all around.
No twittering of birds, no cawing of crows.
The nightingale’s broken song,
You know there is something wrong.

Mukherjee Mullick’s poems are characterized by a rhyming that produces a lingering musicality. The simplicity and directness of syntax are a common feature in the poetic art of Mukherjee Mullick and Sriwastav.

As I traverse from one volume to the other, reading and re-reading, finding nuances and tracing patterns, I find an elegance of expression that surely bodes well for Indian Poetry in English.

Bio:
Dr. Nishi Pulugurtha is Associate Professor, Department of English, Brahmananda Keshab Chandra College, Kolkata. Her areas of interest are British Romantic literature, Indian writing in English, diaspora literature and Shakespeare adaptations in film. She has published papers in refereed international and national journals and books. She has a monograph on Derozio (2010) and a collection of travel essays, Out in the Open (2019). She guest edited the June 2018 issue of Café Dissensus on Travel: Cities, Places, People. Her recent book is an edited volume of essays on travel, Across and Beyond (2020) and a volume of poems The Real and The Unreal and Other Poems (2020). She also writes short stories and on Alzheimer’s Disease. She is Secretary of the Intercultural Poetry and Performance Library, Kolkata.