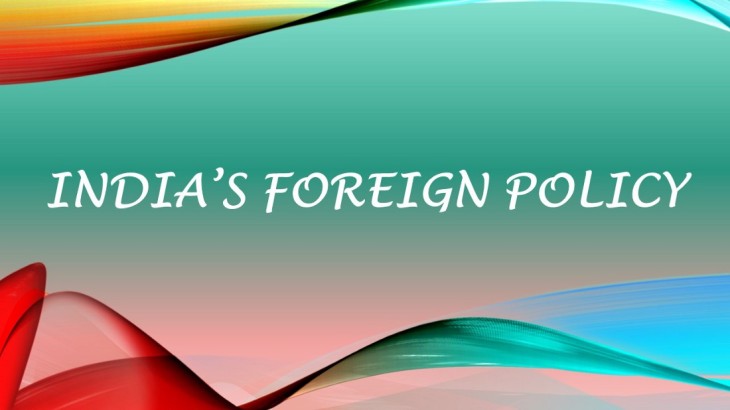 The last few years have witnessed a significant churning and re-shaping of Indian foreign policy. Interestingly, it has taken place under a government that explicitly professes its claim of being different and one that keeps the country’s national interests first. Since independence in 1947, out of nearly 75 years, India has been ruled by the Congress party for almost 65 years and 37 of those years, it has been ruled directly by members of the Nehru family.

Successive Indian governments have claimed that the foreign policy is one domain where all of them, irrespective of party and leadership affiliations, have followed uniformity and continuity. However, the winds of change were evident for the first time since the hold of Nehru dynasty became weak on the Indian government in 1991 where the Congress government for the first time was effectively led by someone outside the family. Late Narasimha Rao, arguably one of the most competent and scholarly leaders India has seen, tactically side-lined Nehru dynasty, the first-family of Indian politics and initiated the much-needed reforms in economy, diplomacy and foreign policy.

The Indo-Soviet Friendship Treaty of 1971, virtually abandoning the non-aligned foreign policy in pursuit of the creation of independent state of Bangladesh, ensuring Sikkim’s integration into India and the first nuclear test in 1974, were the first boldest initiatives that India undertook in her evolving foreign policy management. Establishing diplomatic relations with South Africa and Israel (the latter was treated with contempt by Indian politicians from Congress, leftists, and some regional parties due to their fascination for Muslim votes), was one of the momentous changes in Indian foreign policy. India’s nuclear testing for the second time in 1998 by Vajpayee government, in the midst of tremendous domestic (especially leftist) and US-led western pressure and explicitly citing China as the reason, turned out as another major milestone. The signing of the Indo-US nuclear accord in 2006 (again in spite of tremendous opposition from leftists in India and also by China), could be seen as one of the significant foreign policy departures from the 1950s diplomatic pillars of non-alignment, Panchsheel, a timid China policy, and a non-nuclear stance by the country.

Beginning in May, 2014, the Modi-era heralded a much-needed, refreshing change in the foreign policy establishment in the country. Beginning with the invitation to heads of neighbouring countries to the government’s swearing-in ceremony sans China (but including a representative from the Tibetan-government in exile) and including Pakistan PM Nawaz Sharief, suggested the new Indian government’s rightful priority to strengthen good neighbourly relationship. PM Modi’s impromptu Lahore visit returning from Afghanistan, tried to add an informal, personal touch to country’s relations with Pakistan, its most difficult neighbour. After the Pakistan-backed terrorists attacking an Indian army base at Uri in Jammu & Kashmir, allowing a Pakistani-investigative team, including much-despised ISI officials, to the strategic base, indicated a fresh perspective on Modi-administration’s desire to evolve, nurture and develop a decent, working relationship with Pakistan.

On the eastern side, under Modi’s stewardship India resolved a 44-year dispute with Bangladesh with the signing of Land Border Agreement (LBA), that settled the issue of enclaves and citizenship for thousands of people and started a new dawn of friendship and understanding between the two neighbours. While China, insecure in its competitive rivalry with India, tries incessantly to lure or scare away its small neighbours like Maldives, Sri Lanka, Nepal, Bhutan, Myanmar, the Modi administration has steadily followed a policy of good neighbourly conduct with them.

Bhutan, Nepal, Maldives, Sri Lanka, Bangladesh, Myanmar have seldom witnessed unusual interference in domestic issues by India (allegation that was frequently levelled against it till recently) and offered a significant financial, technical, diplomatic support to all of them. So much so that when Nepal faced continued domestic instability and the role of Chinese Ambassador Hou Yanq in it became widely known and in Myanmar, the Tamadaw was promoted by Beijing, Indian government broadly maintained hands-off policy.

In Afghanistan, till the advent of Taliban in August, 2021 India maintained close political, economic, diplomatic, and strategic relationships with it. However, while maintaining a perceived distance from them, it knows very well that keeping the land-locked Afghanistan totally at the mercy of Pakistan will go against its national interest since both will take the opportunity to finance, encourage, support, and use terrorists from there as cannon fodder to create trouble in the Kashmir region. Hence, India even while not granting Taliban with the diplomatic recognition, continues to provide them with much-needed food, medicines, and vaccines, thus continuing to maintain functional communication.

On Afghanistan and Myanmar, the Modi administration seems to have limited choices. While it might not like the existing dispensation in both countries, it needs to have a close working relationship with them for political, strategic, and economic reasons. Some sort of humanitarian support will keep Afghanistan running, even as the country continues to stare at economic disaster and human tragedy. Otherwise, it will be forced to get explicitly into Beijing’s embrace who is simply waiting for right time to get more deeply involved in it with the help of Pakistan and exploit its huge natural resources. On Myanmar, if India gets into the western chorus of demanding democracy, again it could be compelled to get entangled with China and help terrorists operating in India’s north-eastern region.

On Pakistan and China, the two most difficult Indian neighbours since 1950s and 1960s, Modi’s foreign policy seems evolving and moving in line with the greater national interests of the nation. In case of the former, India tried to evolve a good, working economic relationship, relegating the troublesome political issues, including Kashmir, to the background as is the case with its relationship with China. However, a radicalised, economically crippled Pakistani government led by embattled PM Imran Khan chose politics over economy and subsequently raised the battle cry against India to the extent that the two countries have been virtually on no-talking terms since August, 2019.

In case of Pakistan, post-Uri Indian army’s surgical strike deep inside Pakistani territory and post-Pulwama Balakot air strike could be construed as important diplomatic, strategic milestones. It has demolished the so-called Islamic Bomb Pakistani threat to offset Indian military superiority in conventional warfare. The recent National Security Policy (NSP), talking of 100-years of peace with India, needs to be seen in this context along with its failed economy and dramatic decline in relations with the US.

China, another of the difficult Indian neighbours that aspires to become a global bully while continuing to talk of partnerships in pursuit of peace and development, tried to continue promoting economic and trade relationship. The Modi government too, played an amiable neighbour that valued the Indo-Chinese economic relationship. It resulted in 18-meetings between Modi and Xi Jinping, between 2014-2020 including the informal summits at Wuhan (China) and Chennai (India).

However, India took a very firm stance against China when it tried encroaching directly upon Indian strategic interests, first in Doklam (Bhutan) and then in Ladakh (India) and did not hesitate in initiating a military response. The significant change in Indian diplomatic response could be ascertained in two distinct ways: one the ability to use coercion or military response against both Pakistan and China. At the same time, conflict resolution, i.e., the ability to contain conflict to the local level while protecting its core strategic interests. Post-Uri and Balakot strikes and the Doklam and Ladakh crisis, the Indian diplomatic and military circles worked in unison and ensured that adversaries in all cases have either to come to the negotiating table or cannot have a normal bilateral relationship with India.

Another major evolving change could be seen in India’s thriving relationship with all Arab countries. When Modi became the Indian PM, there was an apprehension that his alleged anti-Muslim credentials, would hamper country’s bilateral relations with Islamic countries. However, contrary to perception, Indian-OIC relations have become much deeper while Pakistan’s relationship with them have deteriorated significantly.

The major evolving changes in the Indian foreign policy in the last seven years could be summed up in certain ways. One, it has become evolutionary that may or may not have continuity as its core component. While since 1950s successive Indian governments made it a point to improve relations with others but not at the cost of antagonising China which took that opportunity to build a huge economic and military lead over India. However, the current Indian government while trying to maintain peace with China, never shied away from facing it head-on and even joining others, in formal or informal blocks to protect core strategic and economic interests.

Second, while diversifying its trade and strategic partners India has been trying to expand its sphere of influence too. While traditionally, it has been content with protecting its turf only in the neighbourhood and at most in the Indian Ocean Region, now India is explicitly expanding its influence in south-east Asia, including South China Sea, Indo-Pacific, Central Asia and even as far as Africa. Much to the chagrin of China, India is trying to expand its footsteps in Mongolia, Vietnam, and Philippines (it recently signed a US$ 325 million Brahmos missile deal with Manila).

Fourth, while various economic measures aimed at enhancing domestic economic might are underway, for the first time India has been explicit in projecting itself as a strategic net security provider to countries like Bhutan, Maldives, Sri Lanka, Bangladesh, Mauritius, and a few others. It has been also aggressively promoting its military exports in the global market, scouting and setting upon military bases in certain regions that have been conspicuously absent all these years in the Indian strategy.

Finally, as part of the new strategy, India is no longer overtly emphasising on virtues of non-alignment. Instead, the buzz is one commonality of interests as should be the case. Wherever needed, stress is on bilateralism, be it in relations with the US, Russia, France, Brazil, UK, Japan, Australia, China, or others. Defensive aggressiveness has also become a feature of Indian diplomacy for the first time as could be seen in the response to Malaysia and Turkey’s harping on the Kashmir issue in the UN. An unofficial ban on Malaysia’s exports of palm oil to India and enhancing bilateralism with Cyprus, a few lucrative contracts for military drones to Turkey, saw both staunch supporters of Pakistan, turning cold and maintaining a sudden turnaround. The fierce defence of Indian stand on Russo-Ukraine war is one such real example of free and independent foreign policy.

The evolutionary changes in the Indian foreign policy indicate that while continuity is important, the ongoing changes in the global arena needs to be watched, assessed and relevant actions need to be calibrated based on their analysis to achieve a “rightful position of India in the emerging global order” that the country has wished to achieve for long.