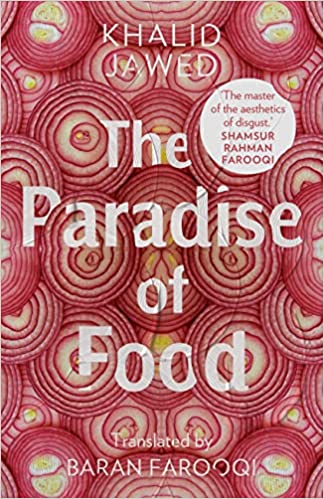 Where do the souls of the dead live once they leave the bodies? What happens to the heart when it longs for people unconditionally but never gets reciprocated for the same? Khalid Jawed’s Urdu novel, Ne’mat Khana, translated as The Paradise of Food by Baran Farooqi, answers such questions. It narrates the story of Hafeezuddin Babar aka Guddu miyan and captures the social and cultural milieu of a bygone era. Jawed’s novel reads like a memoir but employs a grand philosophical narrative style. The author’s elephantine memory gives the minute details of the culture, politics, cuisines, stereotypes, and taboos of the time. Jawed is a prominent Indian literary figure, who has bagged many prestigious awards for his work. Jawed’s short story Akhri Dawat (The last supper) is part of the comparative literature course of South Asian Studies at Princeton University. His latest offering is a novel, Ek Khanjar Pani Mei.

The Paradise of Food is set against the dark and gloomy sides of human nature. At the outset of the novel one comes across a picture, drawn by Guddu miyan’s soul. Guddu miyan visits his ancestral home and as his soul runs to the kitchen, it freezes there. The soul takes us on a trip down memory lane, comprising of a rich culture, as well as a joint family which is imbued with a strong sense of belonging. On the way, the soul nostalgically remembers the human relationships, its social as well as cultural dimensions – attached directly or indirectly with a kitchen. For instance, he himself is raised by his maternal uncles, as he is born an orphan. People care for him, especially Anjum baji, who gives him this nickname ‘Guddu miyan’. He loves the dishes prepared by her. He feels attracted to Anjum baji and even murders her lover for assaulting and torturing her.

In the novel, the kitchen encompasses “the good, the bad and the ugly” that can happen in a person’s life. The language of articulation of this life is hunger. The hunger symbolizes two things: first, a craving for the good food that never dies even while mourning the demise of loved ones, or during the celebrations; second, hunger also stands for lust practiced under the socially constructed as well as controlled norms. One gets to know that the kitchen is the most “dangerous” site:

The novel echoes the truth of our unconscious and the gothic environment in which we live. The novel not only entails the technicalities of surrealism and dark humour but also appears to be an instance of dystopian literature. Hafeez throws a stone of white salt from kitchen at the beehive that hangs over the tree under which Sarwat mumani and Feroz Khalu are found in a compromising position. Right after this, Sarwat mumani disappears from their lives, while Bade mamu, who enjoys late night mujra that takes place in the locality, lives a comfortable life back at home. The episode not only hints at the social taboo but also questions women’s agency.

The varieties of food come to represent bad omen for Guddu miyan. On different occasions, he predicts that something bad would happen, and pins down the bad omen to the specific food that was cooked that very day.

‘Kadhi.’ I began to think, and my body gave a jolt. It’s Thursday today, and cooking kadhi on a Thursday can prove destructive. An unknown kind of wave of lightning passed through the hair on my head. For a moment, the hair on my head stood on end. I felt a molten fire flowing from my throat down to my chest. I was about to experience a fit of awareness. I experienced once again today a mysterious and ill-omened spiritual capability which presents evil portent as a simple game of the creator before me. That moment passed. My senses and consciousness came back to their usual form.

‘Kadhi shouldn’t have been cooked today. It’s not a good omen,’ I mumbled.

Jawed often resorts to symbolism. He draws picturesque scenes that amuses the reader, provides heartfelt laughter, and at times fills us with disgust. In the beginning of the novel, the protagonist describes himself as the wind, which is like his memory, that haunts him everywhere just like a ghost. It also triggers a bout of nostalgia about a bygone era. The character muses: “The only loss in death is of memory. I’m alive, much more alive than others.” Similarly, ‘Noise’, the second chapter of the novel, describes Hafeez’s inner voice regarding his attachment to his past and the guilt of his crime that occurred twice during his juvenile age. Notwithstanding the crimes, the protagonist elicits sympathies of the reader. What fetches our sympathies is a heightened sense of justice as well as the search for a platonic relationship which he, unfortunately, fails to sustain in his entire life. Thus, the girl who often used to appear in his dream remains a dream. His longing for a daughter who might have given all her love, as his ears echoed, “Papa, papa, my papa”, remains unfulfilled because the protagonist’s wife aborts the baby because it is a girl. Hafeez is devastated by the loss of the baby, and he develops a disgust for his wife. Even Anjum apa and Anjum baji, for whom he commits crimes and burdens his life with guilt till his last breath, pay little attention to him after their marriage.

Jawed’s novel depicts the shallowness of human emotions and fragility of relationships. Hafeez’s marriage to Anjum, who is raped in the college canteen, is a testament to this. Hafeez never lets us know the circumstance in which he marries Anjum and Anjum never stands by her husband. On the contrary, she takes away Hafeez’s happiness by aborting their baby girl and bringing up two sons who never pay any heed to their father. Interestingly, the women who impact Hafeez’s life differently bear the same name – Anjum. Since Hafeez is deeply attached to his roots, he joins his ancestors after his death because he had shared the roof, the kitchen, and had also spent time with them:

Everyone will have to go and unite with people who are like him one day. It doesn’t make any difference whether they are able to recognize him or not. Is this what they call coming alive once again or is it the second death or is it a legal case in the court of death? A case that has been filed against the human intestines, which is eternal and will continue forever?

In this novel, Jawed draws our attention to human lives that exist under the belly of darkness, gloom, and boundaries set by the societies. The happiness, the charm and the pleasure that are visible to us are nothing but a shallow thing, a fake countenance rather. Above all people don’t want to show their true self. They overshadow their sorrows by hiding them under materialistic things. As an antidote to this attitude, the author wants us to accept the gloominess present everywhere. The novel leaves a deep scar on the heart in the end. Baran Farooqi’s translation of Khalid Jawed’s Ne’mat Khana is an important contribution to Indian literature. The pacey and smooth translation keeps the reader glued to the novel.

Bio:
Sadia Hashmi is based in New Delhi.