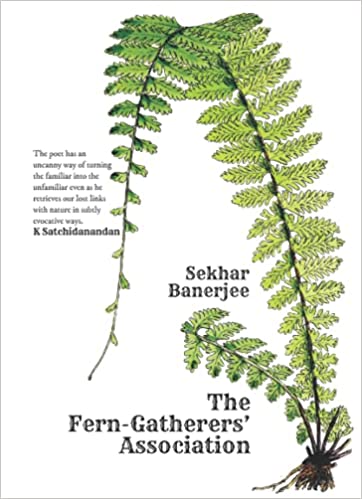 A green fern that twirls around a large part of the cover is what first strikes me as I hold this volume of poems, The Fern-Gatherer’s Association by Sekhar Banerjee. A little brown at the base of the fern and a few more leaves on the back cover that have a few shades of brown in them as well. The volume reaches me at a time when the autumn sky reminds me of the flora of the hills. A widely published bilingual poet, Sekhar Banerjee writes with equal élan in Bengali and English. The Fern-Gatherer’s Association has 70 poems that are divided into 3 sections – ‘Floral Bedspread’, ‘Fluid Room’ and ‘Salt and Autumn’.

The first poem speaks of spaces, restricted and beyond access, of questions that are asked and left unanswered, of questions that should not be asked. The repetitions of the italicized ‘yes’ and ‘no’, the use of images from the daily and the mundane rigours of life endow the poem with a rootedness that at the same time gives it a universal tone. The grandmother is compared to an “areca grove” that branches out, to speak of the family that grows and spreads all over.

Everybody would say:
All the rooms are your – yes, yes
But, why some rooms are closed? – no, no
We could not ask that then, though

Poems like “Loss” and “Property of the Eye” speak of the times we live in, a world of isolation, of quarantine, of physical distancing. In “Loss”, Banerjee speaks of the “quarantine shirt collar” and of the fact that “I smell loss.” The loss and darkness find expression in the second poem as well where he speaks of

Banerjee’s poems are characterized by an abundance of imagery that is gleaned from the world around, form the humdrum of life, from the natural world around. “Dogs and Butterflies” describes autumn as

. . .  season
of half-closed windows
and doors

At times the images pile on each other in quick succession creating a canvas that lends the lines and their senses a charm that lingers on.

Walking up late with a knot in your head, you fish out
your mobile from the wardrobe
and your spectacles from the kitchen
Nowadays they change their places often
like a Roman musical-chair event
and they forever wait to be picked up, as if,
they are your old favourite books… (“Other Botanical Herbs”)

There is a wry sense of humour in many of the poems, in the way ideas and images are presented, in the way they coalesce to make one pay specific attention to. “Cemeteries of Lettuce, Lamb and Fish” speaks of the refrigerator:

lettuce leaves, dead fish, and the legs of lamb
all are waiting in the womb
to come out one by one

The use of “before you” at the beginning of every line in “Retrospective” adds an urgency to the lines, with a series of images that lead on to the last line, that is a final conclusive statement. One that brings in a sense of time, of time only present, of the now: “You should know there is no tomorrow.”

Places play an important role in many of the poems, in the very titles of some too – “Red Bay of Bengal, West of Java, North of Madras,” “Running Up the Cliff,” “Of Jetties and Islands,” “The Calcutta shop,” “Second Flush in Danguajhar Estate,” “Buxa Forest Camp”. People, things, ideas and associations, food and memory are brought in, with the sights and smells as well. “Kalkatta Biryani” brings in the historical event of the Nawab of Awadh who had to stay on in Metiabruz, creating a mini Lucknow far away from home.

Is there any sadness, I mean huzn, left in the air too,
like a hint of rose-water, blue potteries
saffron an old clove?

While the city figures greatly in Banerjee’s poems, the hills and gardens of North Bengal feature a lot too, a hark to his belonging to the place that remains wherever he is. The tea gardens that carpet, the fresh air, the wonderful verdant scenes are a prominent presence in some of the poems.

A right turn near the old factory building finds
a tea-worker’s canteen
the air smells of several boiling points, fresh leaves
and an old sieve

The slopes and foggy mountains, the warm afternoon sun, “grief, insomnia, pickles, women,” the “season of the fog” (“Samchi Pickle Factory”), of “a lonely day in the Terai plains below”, of mists, of “Hong Kong Market, new shopping malls, the toy train”, sights familiar that voice feelings of loss and longing, of simple life that trundles on (“Longing”), of mornings that “have no sense of shame/for being so loud,” of music that seems to be everywhere:

whistling to miscellaneous work,
strumming the morning the whole day
like a low-cost concert (“Concert”)

The poems in The Fern-Gatherer’s Association bring together ideas, images, associations, endowing the known and familiar with a dreaminess that fills the senses, of metaphors that linger on, at times languorous, but always rooted in the harsh realities of lived experience that are never far away. It is these varied layers that appeal and lend the poems a universality. Written in a style that is simple, with many local words retained (in “The Essayist” the Bengali word batabilebu is used), the poems speak at various levels. Banerjee uses much less capital letters at the beginning of lines creating a feeling of a casual conversation in his lines. With the breeziness, the smell of fresh mountain air, of difficulties that thwart the human spirit, of struggles in tea gardens and factories, Banerjee’s verses are a delight to the senses. This is, surely, a volume of poems that can be read over and over again.

Bio:
Dr. Nishi Pulugurtha is Associate Professor in the department of English, Brahmananda Keshab Chandra College and has taught postgraduate courses at West Bengal State University and Rabindra Bharati University. Her research areas are British Romantic literature, Postcolonial literature, Indian writing in English, literature of the diaspora, film and Shakespeare adaptation in film. She is a creative writer and writes on travel, Alzheimer’s Disease, film, short stories and poetry. Her work has been published in The Statesman, Kolkata, in the anthology Tranquil Muse and online – Café Dissensus, Coldnoon, Queen Mob’s Tea House and Setu. She has a monograph on Derozio (2010) and a collection of essays on travel, Out in the Open (2019).