India is a vibrant country where knowledge and wisdom do not necessarily remain confined within the walls of the educational institutions. One can expect the highest order of philosophical insight from the marginalised and so-called, under-educated people of our land. Perhaps it is the daily hardships and the cruelty of life, which like strict professors mould the thinking and problem-solving capabilities of these people and enables them to think like a researcher. Unsurprisingly, it is an encounter with a farmer that helped shape my research pathway.

The winter of 2017, I had just finished my coursework at IIT Delhi. I was travelling back to my ancestral home at Dasghara, a village seventy kilometres from Kolkata, West Bengal. I was looking out through the window of the bus when a conversation caught my attention. Two farmers were sharing their misfortunes over the loss that they had incurred despite having a decent enough harvest.

Brother! Can irrigation be costless?!

I was utterly confused. Can a good harvest bring forth financial loss? Intrigued by the question, I joined the conversation: “Is not the price of paddy good enough this year?” I asked. One of them nodded his head and replied, “Dada! We have fetched good prices for the harvest, but it did not rain enough in monsoon. We had to spend a lot of money on diesel for the irrigation.”

Instantly, a solution came to my mind. I said, “Do you know about Solar Energy or Biomass energy? They are costless. They can run a pump, and you need not spend on diesel even in dry seasons, and when you are not running the pump, you can supply the energy to West Bengal State Distribution Company (WBSEDCL). You will receive money for it.” Though the existence of solar/biomass energy was known to them, the last part of my proposition triggered his imagination.

He instantly replied, “Then dada, someday, I will install a solar plant beside the paddy field as well as in my house. My electricity bill will get reduced too. Can everybody in the locality install solar energy? Will it work on the existing light, fan or television? You see, dada, solar energy is something new, and our household equipment might be unaccustomed to the energy source.”

The farmer’s words may appear thoughtless, but it is the very same question that the professors of the power research group at IIT Delhi have been investigating for the past few years: “Will huge integration of renewable energy into the utility grid create any problem with the stability of the existing power system? If it does create instability, how to tackle it?”

I opted to end the conversation with a simple statement: “No, dada, it will not create any problem for your household equipment.” I distracted myself by looking at the idyllic scenery, but my inability to answer correctly soon started haunting me. My PhD supervisors previously articulated the genuineness of the problem, and so I took up “stability of renewable integration to grid” as my PhD research project. If an otherwise simple conversation influenced my research question, it is another such interaction which would lead me towards the answers.

This time it was the village priest, a serious middle-aged man, who happened to be an acquaintance of my grandmother. Every time he visited our home, he would ask the same question, “Beta, what are you doing these days?” I earnestly replied, “Just going to start my research, kaka!”

“Any particular topic?” he asked. I replied, “Nothing decided yet kaka, but I am thinking of working on the stability of electrical systems.” As was his nature to relate and explain everything to the ordinary villagers through knowledge gained from the scriptures, he responded, “Oh.. you know beta, Arjuna was also concerned about his mental stability during the battle of Kurukshetra. He said to Krishna, “Chanchalam hi manah Krishna pramathi balavad drdham (My mind is restless, turbulent and obstinate due to the current events on the battlefield).”

“And what solution did Krishna give to him?” I asked. “Krishna said, ‘Anudvigna manah, sukhesu vigataspraha, vita-raga-bhaya-krodhaha, sthita-dhira munirchitya (The person with a steady mind is free from attachment, fear and anger),” he replied. These words may seem quite far-fetched from the discipline of electrical engineering, but, it is the base and the foundation of my PhD Thesis. After I returned to Delhi, I started connecting the dots.

A standard renewable energy system comprises an energy source (Solar, Wind or Biogas) generating energy in the form of Direct current (DC) and an inverter which converts DC to Alternating current (AC). The AC is fed into the electric network or utilised to power local electrical appliances. A microprocessor embedded controller regulates the amount of power to be converted from DC to AC. When the energy system is feeding power to the utility grid, the controller does two tasks. First, it tracks the status of the AC voltage present at the connecting point, which is performed by the Phase-locked Loop (PLL) algorithm and secondly, a power control algorithm which injects the right amount of electric power to the utility.

The inverter and its electronic control system is a highly complex system interacting with the changing utility grid voltage condition. One can say that it is like a complex human mind interacting with a diverse social environment.

I investigated the causes of instability in the inverter system. I noticed that the erratic and unpredictable nature of the utility AC voltage was creating three types of anomalies in the inverter system. First, the amount of power transferred to the utility was fluctuating severely. Secondly, in extreme cases, the fundamental sinusoidal nature of the AC voltage and current wave was getting distorted. Thirdly, even if the AC utility voltage became stable after some time, the inverter system continued its erratic behaviour. After pondering over the problem for a long time, the metaphors revealed themselves to me.

The first case is “Chancahala” or restlessness, an inability to supply a constant amount of power. The second case is “pramathi” or agitation, a failure to convert DC to AC properly and the third case is “balavatdradham” or the quality of being obstinate/stubborn, i.e. the lingering unstable behaviour despite the cause of instability not being present. It appears Krishna’s explanation of instability was perfectly crafted for a renewable energy system.

The excitement of discovering this analogy prompted me to explore Krishna’s solutions to instability as well. The village priests’ explanation of the solution was related to the human mind, so I took up the task of translating Krishna’s solution for electrical engineering.

I started to follow the Krishna way. The first step was “anudvigna”, a way to break the attachment of the control system to the unstable external grid. The PLL algorithm, which tracks the utility grid voltage, is chosen to do the task. In such a way, in the event of grid instability, the PLL turns a blind eye. This redeveloped PLL algorithm makes the control system immune to external disturbances. The second focus was “vita-raga-bhaya-krodha”, i.e. developing a power control system, which changes its nature automatically when instability occurs. This act is analogous to Krishna’s advice to drive away fear and anger, i.e. changing the ways of one’s thinking to counter an adverse condition. In my case, I was changing the control system parameters dynamically with changing utility voltage condition. 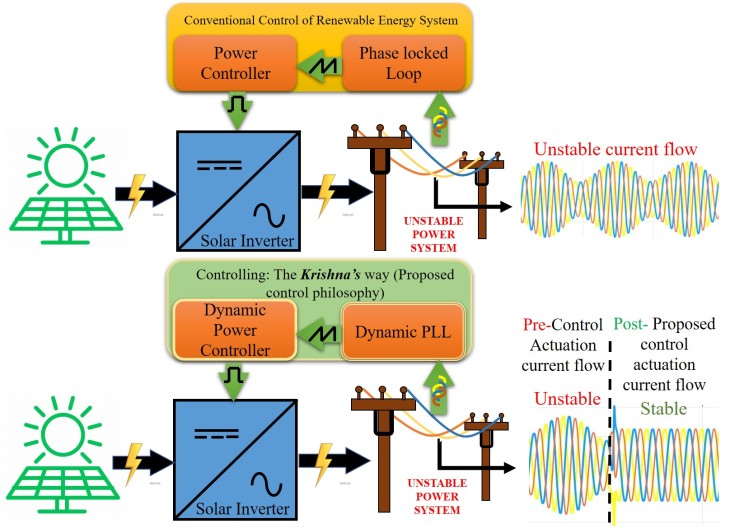 Krishna’s solution worked, and I have successfully implemented the developed control to perform a stable power transfer from renewable energy systems to the utility grid, even in unstable grid scenarios. The figure shows the transition of the flow of current from unstable to stable  mode due to the actuation of the proposed control strategy. The findings have been included in the work, titled “Return ratio shaping approach to stabilise inverter weak grid system” (IEEE Transactions on Energy Conversion).

My PhD journey has, therefore, taught me two important things. First, the vast philosophical applicability of the wisdom of the East as contained in various treatises and oral traditions. I believe this knowledge often considered too cryptic for our use can actually be deciphered and utilised to solve real-life problems. Secondly, as a researcher working in the domain of technology, I realise the need to interact with and understand the daily life of ordinary people. For, it is them who are the source of new engineering problems as well as their solutions.

Bio:
Arpan Malkhandi received his B.Tech. degree from West Bengal University of Technology, Kolkata, India in 2014 and M.Tech. degree in power system from Birla Institute of Technology, Mesra, India, in 2016. He is currently working toward a Ph.D. degree at the Department of Electrical Engineering, Indian Institute of Technology Delhi, New Delhi, India. His adademic research includes power system dynamics, signal processing, modelling and control of renewable energy systems. His interest also includes ancient Indian philosophy and its scientific manifestations. He is a member of Institute of Electrical and Electronics Engineers (IEEE, US).