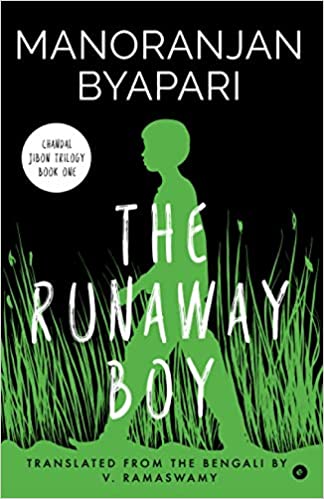 Manoranjan Byapari’s first volume of Chandal Jibon Trilogy, which has been brilliantly translated from Bengali by V. Ramaswamy as The Runaway Boy has at its heart a furious gusto which compels the grandfather-sounding narrator of the book to chronicle the woes of the Namasudras. The novel begins at Barisal during the tumultuous and riotous days of the partition with vivid sketches of communal tension and the inhumane atrocity of the caste system. The titular character, Jibon, his father, Garib Das and Jibon’s mother, Bimala, who unlike the two male characters of his family largely remains voiceless throughout the novel, are forced to migrate across the border and thus begins their agonizing days at the refugee camp in Shiromonipur. The adolescent Jibon’s travels which constitute the bulk of the later part of the book seem like an inevitable extension of that despair.

This is a tale of unending misgivings and horrible injustice that generations after generations have inherited and endured. The book feels like Byapari’s attempt to show the world what life in the margins looks like – which Byapari does with a ferocious rage. The oppression that has dipped its roots across the frontiers of recordable time or memory has not been able to break Byapari’s spirit.

To be condemned to a life of suffering and misery, one cannot help but be reminded of the Greek tragedies. The sufferings faced by the Namasudras and other Dalits much like the characters from Greek tragedies are sealed to their fate. In Sophocles’s Oedipus Rex, Oedipus has no hand in his ill-fated destiny – he was merely born with it and dragged his dreadful fate throughout his life, unable to escape its wrath. The woes of hunger, extreme poverty and sheer injustice that afflict the Namasudras are comparable to Oedipus’s pangs in their magnitudes and their inability to sever away from sufferings no matter how much they tried – which they have done nothing to deserve.

The Greek dramatists who invented the form breathed life into their texts and exposed human or divine follies in all their enunciations. But in pages after pages of Byapari’s novel, he shows little intention of working with the characters or even tweaking with the narrative structure. The result is that of a glorified political pamphlet – although a necessary one in our political climate, this feels more like an act of activism than a literary one. Why can’t this be both? Well, it is, and it would be disheartening if it wasn’t, to be honest. The reason for my hesitation is because Byapari’s zeal for a delineated political narrative is so palpable throughout the pages that it makes me ponder what his priorities are: ideology or literature?

Unlike Aeschylus’s Prometheus Bound, The Runaway Boy shows no trace of revolt against an authority (like Zeus) or the exploitative system. Byapari overwhelms the reader with an avalanche of agonies and astonishingly it seems to work out for him to some capacity and we have a book of 360 pages in our hands.

You don’t see a character like Euripedes’s Medea who defies all woes thrown at her and will not stop until she has enacted revenge for the injustice done to her. Though one should acknowledge that surviving systemic oppression is in itself a mammoth undertaking. And it is the will of Bypari’s rage against oppression alone that keeps the narrative flowing.

Byapari isn’t the first Bengali writer for whom ideology has surpassed or even blinded the artistic or literary aspirations of the text at hand. One is reminded of the Hindu nationalistic jingles in Bankimchandra Chattopadhyay, especially in his later novels and essays. Then, of course, we have our plethora of leftist writers whose works embrace the ideological political narrative in their heart and usher a fresh approach to looking at life free from the brick-mortar superficiality of the materialistic urban sphere.

Manik Bandyopadhyay or Hasan Azizul Huq who are masters at telling stories of people living in the margins adorn their craft with grace, depicting an acute sense of class-consciousness without compromising the subtlety of their political position and sticking their beliefs to the readers’ face. But for Manoranjan Bypari, it seems he has little faith in subtlety; seeing the world through an ideological lens shrouds the characters in an unwanted veil who are already distant in a different cultural and socio-political landscape, making them and their world even more inaccessible. Surely, Byapari didn’t intend that to happen. But if you, the reader, are too keen on dipping your toes in the murky waters of representation and identity politics, you will have to bring in your own feel-good-cookie.

I am writing this piece about a book on injustice and oppression, while at this very moment innocent, civilian Palestinians are being bombed and their lives ruthlessly thrown at the mouth of death.

When it comes to raising your voice against agents of oppression, media and form does matter. Apathy towards form can be self-defeating – it makes little sense to yell it all loudly when it is barely able to express our agonies. Recently a poem by Noor Hindi started floating around in social media feeds. When our people are dying is exactly when we need our defiant voices of resistance to point finger at the world that we have been wronged and their silence makes them as much complicit as the brutes.

We forget too easily that classical expressions of protest – picketing, processions, and meetings – are different forms that carry the language of dissent and defiance against oppression. Traditional forms that sync and harmonize with the tongue of the oppressor effortlessly become unsuitable as media for conveying the languages of protest. This would necessitate the birth of something new – fertile grounds for the creation of unique artistic forms and expressions.

Though The Runaway Boy contains great potential and the breadth of epic magnanimity in its subject matter, the structure and framework of the novel is inadequate to hold its own spellbinding rage against oppression.

Bio:
Mursalin Mosaddeque grew up in the suburban town of Rangpur in Northern Bengal. He can be found @bluets001 on Instagram.