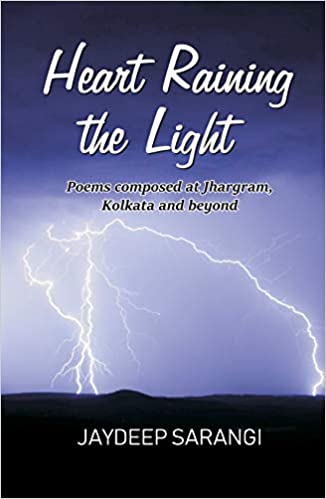 Jaydeep Sarangi is a well-known Indian English poet and has been widely reviewed. An academic, poet, critic, editor, and principal of a college in Kolkata, Sarangi dons many hats. Sarangi’s poems are a record of a questioning and observing mind that absorb the minutiae of life.

The blurb in Sarangi’s collection of poems under review, Heart Raining the Light: Poems Composed at Jhargram, Kolkata and Beyond, notes: “Jaydeep Sarangi’s poems amalgamate arresting imagery with illogical, yet poetically logical, shifts in their provocatively-dense poetic space[s].” The first poem in the collection, “Travelling with My Poems” speaks of poems as being alone, of being everywhere, in all activities. He speaks of them as being “with the kite runners”, as “souvenirs of my faiths.” The poem also refers to his readers whom he describes as “runners, soul makers.” It is a poem that speaks of the poet’s belief in the power of his poetry and is characterized by a lucidity that charms. There are few poems in this volume that speak of the art of poetry, of poems and of the poet as well.  “Rain in My House of Poems” also speaks of the poet and what he believes poetry will do, of how it might help in difficult times: “After the rain/I want my ideas to change.” In “Poetry”, he speaks of difficult times and the need for poetry that makes things better: “I need your presence and absence/ all those things to touch and leak.” Sarangi takes his role as a poet with great fervour. In “A Poem”, he speaks of a poem as “A congress of ideas/Put in a collage.” He goes on to describe a poem as a “sharp sword”, a “dream” a “cry”, a “random descent of thoughts”, “An endless journey with words, and words.”

Many of the poems in the volume are characterized by a pithiness that enhances the appeal of the poems and reveals myriad levels of meanings in them. In a poem that encapsulates absence he writes, “Your absences/arrived, only you/didn’t turn up.” The poem “This Game is Life” has just two lines that voice succinctly what life is all about: “I’m sick of the stars, let’s go home. / Let’s go home and turn off the lights.” Another speaks of love that is “a wild game” played all around us “for a result/that is never complete.”

Crafted with care and finesse, the poems blend imagery and thought. In “My Home Town” he writes:

On the pitch, off the pitch
life is going to the temple.
Through the lemon green
through the abandoned memory
You revive my senses,
Gentle touches all these nights.

The poems are also characterized by a conversational tone that makes them fine expressions of emotions and feelings. He speaks of absence and longing in “Counting Your Absences” in short sentences that evocatively reveal the pain.

It is only
only you, today.
I wait for your arrival
once again, and again.

Your absences
arrived, only you
didn’t turn up.

There are poems which speak of contemporary issues, of politics in every sphere of human life: “At times, even a simple flight/ of a pigeon is political.” “Dalit Feminism” speaks of marginalization and voices the need for a “Cry for Dalit Feminism”:

My window is a small space
My community is my city
My joys are not yours
My pains are distinct.

Poems such as “Karna” and “Lazarus is Calling” use mythology to speak of “slow time, night unfolds/ its ranges of stories, night’s acts.” Poems like “To a City”, “For My Jhargram”, “My Home Town”, “Return of the Native” speak of the myriad lived spaces:

A playful scarlet of history revisiting
like the return of the native
for the natives, weeping like a child.

“For My Jhargram” narrates the calmness and warmth associated with home and refers to troubled times and grief, to armed uprisings and blood being spilt. The poem “Durga Puja Serenade” evokes the colours and brightness associated with this major Bengali festival, while speaking of the myriad faces that work endlessly and tirelessly to make this festival grand.

Sarangi’s poems also foreground social media, the world of virtual reality, where “the face is no face”:

a spam
a troll
swear words flare up
my Bones
sleeping in a tent.

“Stranger’s Smile” too refers to this world of virtual reality: “I cross many doors/allowed and forbidden.” Poems like “Dancing in Time” and “Religion” voice the poet’s angst that is summed up brilliantly in “The Road”: “I witness all happening around/like a night bird for the river’s far side.” In “Forefathers are Worried”, he speaks of how there is so much of disconnectedness as technology brings us virtually closer to one another.

We are living junk.
no past, no future
only today,
use and throw away to the bin.

“Only a Body” brilliantly sums it all up. The poems speaks of death, of how a living human being moves from breathing, from being alive, to becoming a body that is to be burnt.

Local club members lift up
the strong body
and burn him hard
where the river is most lean and thin.

After all, a body.

Poetry explores the myriad connections that exist, that are apparent and that are hidden too. Sarangi’s lines succeed in brilliantly mapping these connections in a language that evocatively brings all together in poems that tell of times such as these. Weaving expressions, images and feelings brilliantly the poems in this volume add to Sarangi’s poetic oeuvre.

Bio:
Dr. Nishi Pulugurtha is Associate Professor in the department of English, Brahmananda Keshab Chandra College and has taught postgraduate courses at West Bengal State University and Rabindra Bharati University. Her research areas are British Romantic literature, Postcolonial literature, Indian writing in English, literature of the diaspora, film and Shakespeare adaptation in film. She is a creative writer and writes on travel, Alzheimer’s Disease, film, short stories and poetry. Her work has been published in The Statesman, Kolkata, in the anthology Tranquil Muse and online – Café Dissensus, Coldnoon, Queen Mob’s Tea House and Setu. She has a monograph on Derozio (2010) and a collection of essays on travel, Out in the Open (2019).