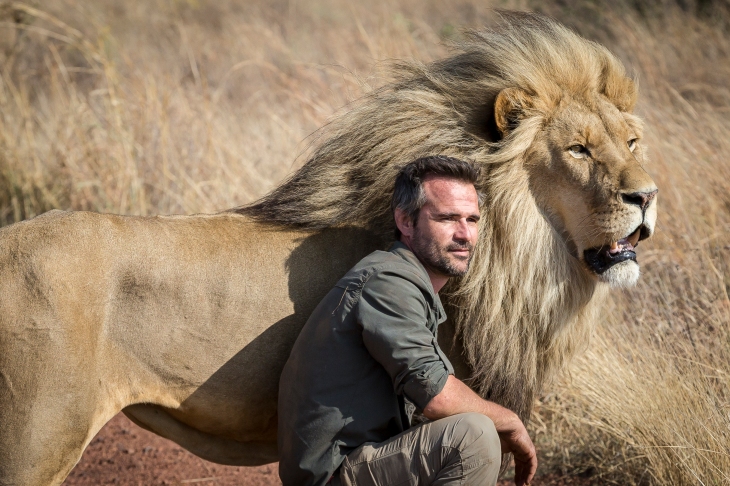 Kevin Richardson – a name that defies the limitation of choice. A choice, that offers no bargaining of death with life. For a pride of lions refuses to negotiate the human way.

The sheer enigma of the profession solely lies in the performance, as each frame unfolds the drama for its marvelous dexterity.

The world at this juncture needs a spike of adrenaline rush and what more could have taken to reignite this passion other than a human-shaped lion walking freely among the real ones?

Patience is the key, what for many can be a real challenge. It’s the only guard that this impressive energy adorns while frolicking with these bunch of lions at his sanctuary known as the ‘Kevin Richardson Wildlife Sanctuary’, that habitats four lion families, stretching on an 1800-acre game reserves of Southern Africa.

For someone who takes a keen interest in studying human psychology, animal behaviour was not where I thought of getting my answers. I was spellbound to witness the majestic love of such apex predators, crushing the man to death with their magnanimous philanthropy.

The only question that forced me to further investigate their decision of treating this man as an exceptional creature, worthy of their love: How could he achieve such a feat?

With one million subscribers, this man is surely an aberration of what it means to truly exist. As he himself says, “I like living life, not just existing life and for me I’m truly living when I’m with the lions.”

An insight into their instinct that is so profound and well read, somewhere to a degree is counter-intuitive to every logical mind. Yet logicality stands defeated in every stretch of their paws, for the flight mode is only a bringer of death.  While the only option it leaves him with, is surely not the game of the weak – the fight mode.

Mastering emotions is the only game they seek. Richardson’s twelve and a half year of constant bonding, has steeled his nerves to even announce his presence while entering their territory, only to expect the obvious.

Far from being mindless man-eaters, Richardson believes lions have a gentle side that few know about. Their ability to show love may hypnotize anyone for its sheer captivation. Not that he is always welcomed, as the killer instinct is just beneath the lions’ skin. It might always appear that it’s only a matter of time before he gets eaten, as often he cannot avoid their sinning against his mortal skin, for he too has been scratched, punctured and bitten.

Yet this man knows how to diffuse the situation that might prep for his heavenly abode. This is how he strategizes his dormant fear that might act as a spoiler to the sport: “One wrong move and everything can flare up. If you react badly and you start pulling or you start getting nervous or panicking he will bite down on you. You make him realize you are not afraid of him.”

To see their tongues pulled or a gentle slap in their faces, are no less of a spectacle of priceless intrigue. For someone like Richardson, who doesn’t appreciate the sturdiness of the security fence while dealing with his skittish cats, it has indeed made possible for the world to look at them as the most affable creatures on the planet.

His deep understanding of the animal instinct is precisely where I paused to reflect on the idea of love and companionship. From watching the lions roll in his laps, to picturing him lying amongst them during afternoon naps, is nothing less than a phenomena.

Such a phenomena, that rightfully understands the contours of finding and falling in love, withstanding all the odds of power struggle.

Human relationships often fail to value such contours of power struggle, fearing their insecurities as fixations devouring their own personas. Real love and the spirit of companionship, grows only from the odds of a fearless camaraderie, like these fascinating creatures who are humbled to accept him as one of them.

Richardson has known what many like us still needs to – The Lion Attitude! That’s the only way to survive the human odds in any relationship. Oneness of spirit is the only language of love that it knows. However, this triumph may not be easy as it requires a greater degree of determination to slowly shed all the differences that resist true communion.

Announcing his presence, “Awwa-Aww”, is not only to align himself to the party, but to legitimize his relationship as a mark of true acceptance and willingness of their being.

Richardson’s first contact with lions was while volunteering at a South African Wildlife Park, where he met two cubs that captured his heart. Today he takes pride in sharing with the world his story of consistency, as he rejects the traditional notion that lions should be mastered and dominated, preferring to develop a relationship over time, based on love and respect.

“The Lion Whisperer”, as most commonly known, and named in 2007 by a British Magazine, Richardson retorts on being asked whether he worries that one day they might turn on him: “ No I don’t worry about lions turning on me because the day that happens and you start to think about, one day will these lions turn on me? You shouldn’t be doing it.”

While complete acceptance has made Kevin Richardson to find his closest place near the mane of the lion, we have to find our own.