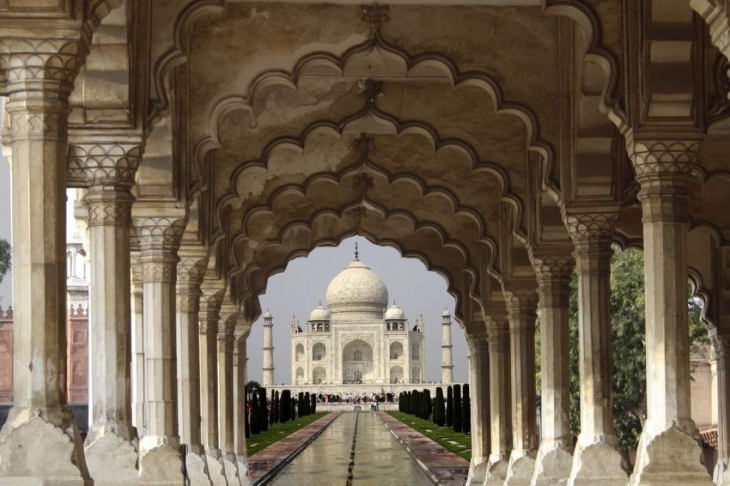 This bank of Jamuna, this edifice, these groves and lawns,
These carved walls and doors, arches and alcoves,
An emperor on the strength of wealth,
Has played with us a cruel joke.
Meet me hence, my love, at some other place.

One of the most popular names in the world of Urdu shayari, Sahir Ludhianvi remains a figure that transcends the boundaries of conventional popularity and poetic genius for a majority of contemporary Urdu poetry enthusiasts. This article focuses on one of his extremely popular ghazals that made the poet a revolutionary in his ideas of love and power. Addressed to his beloved, the ghazal is a lover’s call to shatter the traditional association of the notions of love tied to the Taj Mahal as he blends historical narrative with those of oppression and injustice.

The ghazal begins with the following lines that particularly draw attention to the common lore around this monumental history. The first word of the ghazal, ‘taaj’, is here the conventionally supreme edifice for a lover and it is this notion that the poet appears to subvert, as the poem begins:

The Taj, perhaps, to you may seem, a mark of love supreme
You may hold this beauteous vale in great esteem;
Yet, my love, meet me hence at some other place!

With a voice that is set to deconstruct the romanticised associations that veil the real struggle between the classes, the poet speaks as a lover who wishes his beloved to transcend the commonly drawn boundaries and embrace an ideology that marks their marginal existence.  Born out of the divide that separates the rich from the poor, he urges her to see beyond the falsehood constructed and interwoven with this structure of architectural beauty. The following lines present an outright denunciation of such royal grandeur that the poet claims to have been constructed on a foundation of unjust trials across time:

How odd for the poor folk to frequent royal resorts;
’Tis strange that the amorous souls should tread the regal paths
Trodden once by mighty kings and their proud consorts.
Behind the facade of love my dear, you had better seen,
The marks of imperial might that herein lie screen’d
You who take delight in tombs of kings deceased,
Should have seen the hutments dark where you and I did wean.

Drawing upon the idea of nameless identities that becomes synonymous with the powerless, the poem also questions the validity of celebrating grandeur for the ruling class. The poet again urges his beloved to think of those countless unnamed workers whose contributions to the construction have gone unnamed and shall never be recorded in history:

Countless men in this world must have loved and gone,
Who would say their loves weren’t truthful or strong?
But in the name of their loves, no memorial is raised
For they too, like you and me, belonged to the common throng.

While written on a poetic canvas of sheer lucidity, the ghazal stands out as one that revolutionised as well as became a call for celebrating what remained marginal and oppressed. Questioning a narrative of love for the common men and women who go unnamed, the poet’s stern association of love to human bonds that do not remain subject to wealth and power reverberates in the poem:

They too must have loved, my love, whose hands had made,
This marble monument, nicely chiselled and shaped
But their dear ones lived and died, unhonoured, unknown,
None burnt even a taper on their lowly graves.

The lines quoted at the beginning of this article that form the concluding lines of this ghazal “Taj Mahal” by Sahir Ludhianvi perhaps sketch a critical view of this eponymous monument that turn it into a symbol of tyrannical hegemony. Dissociating the conventional notion of love with this monumental history, the poet’s Leftist call to injustice remains a popular notion in revolutionary narratives till today. In the present year that has surfaced new challenges for people across the class divide, the romanticised notions of love appear more and more obsolete and such narratives as those by Ludhianvi continue to remain as contemporary as ever.

Bio:
Amrita Sharma is a Lucknow-based writer, currently pursuing her Ph.D. in English from the University of Lucknow. Her works have previously been published in Café Dissensus Everyday, Muse India, New Academia, GNOSIS, Dialogue, The Criterion, Episteme and Ashvamegh. Her area of research includes avant-garde poetics and innovative writings in the cyber space.