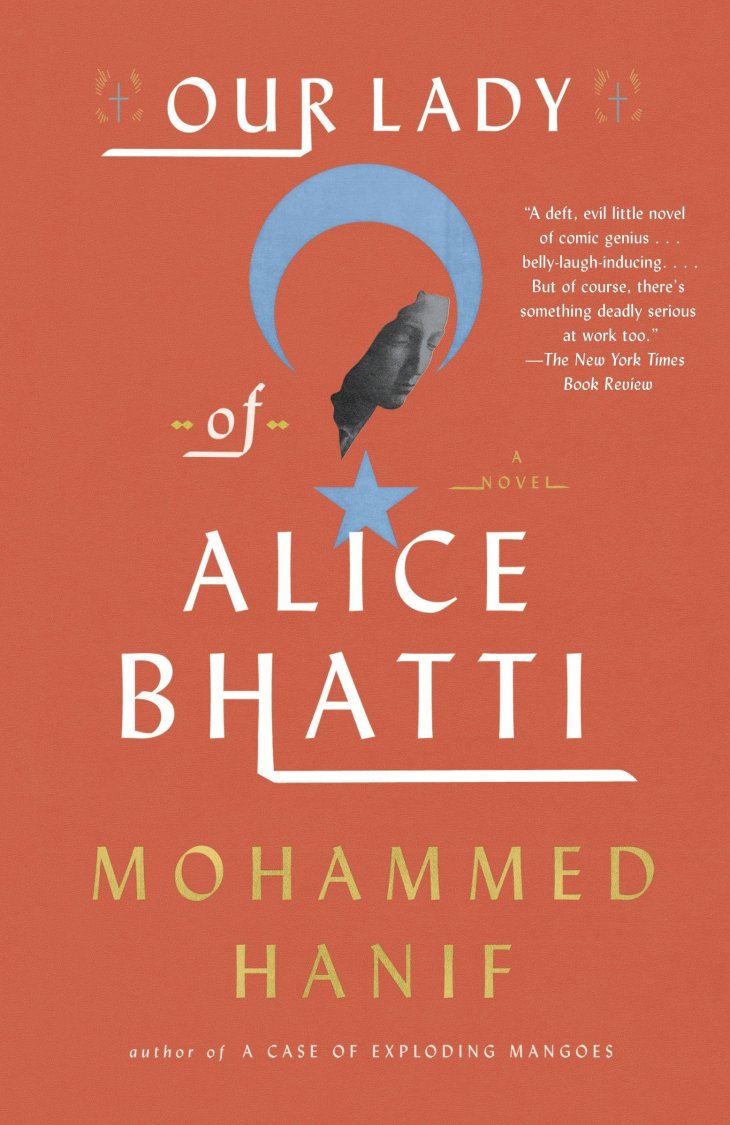 Located in the febrile lanes of modern-day Karachi, Mohammed Hanif’s Our Lady of Alice Bhatti oscillates between madness and sanity. Infused with wry, taunting humour, it exhibits an acerbic critique of Pakistani society through the outlook of an untouchable, Christian nurse. Hanif’s tenacious heroine, Alice Bhatti, works at the stench-ridden Sacred Heart Hospital for All Ailments, a cesspit of disease and hopelessness that yearns for a miracle. Amidst mistakes and misfortunes, Alice elegantly braves her subalternity, carrying, “…her handcuffs lightly, as if she is wearing glass bangles” (p.69). Her demeanour enthrals a police tout, Teddy Butt, prompting a precarious marriage which culminates in a preternatural turn of events. However, the author’s meticulous approach prevents Alice’s story from being caged and transgresses normative genres of romance and tragedy. Societal structures of gender, religion and caste are woven into the characters’ life experiences in grim, sardonic tones. Hanif’s dexterity in integrating social dynamics enables him to bypass didactic motives while maintaining their gravity. These constructs colour the characters’ engagement with state institutions constantly driving them to deplore “the health of the nation”.

Alice Bhatti has lived long enough to know that “…cutting up women is a sport older than cricket but just as popular and equally full of obscure rituals and intricate rules” (p.141). Having observed the reduction of women’s bodies to transactional currency predisposed to misogynist whims, she takes pains to avoid inadvertent attention. Hanif’s scathing assessment of the odious state of women in society is demonstrated in his characters’ experiences and reactions. The two prominent female characters in the novel adopt diverse responses to subjugation, swaying between submission and resistance. Sister Hina Alvi, “…the queen of a sick charya world,”[1] is a self-made, respected senior nurse who has learnt to imitate masculine conduct and make patriarchal bargains, allowing her to construct a niche within hierarchical structures. In a bid to be remembered as a solid administrator, she resorts to victim-blaming before fingers can be pointed at her. Vestiges of conventional femininity are retained through elaborate hairstyles, fashionable accessories and demure smiles. Recognizing embedded male chauvinism, manoeuvring around it and making cryptic criticisms of it is Sister Hina Alvi’s modus operandi.

Her junior, Alice, differs in the course she takes in her negotiations with pervasive sexism. While she has devised a doctrine to render herself invisible to the male gaze, internalizing the narrative that violence against women stems from their doings, she has also resolved to avoid being a passive victim. The razor blade she carries in her pocket and wields on her affluent assaulter depicts her dauntless stance against sexual violence. Violence was also Alice’s riposte when she was made a convenient scapegoat for a botched surgical operation. She is just as quick to direct retorts at her husband against his criticism of her body. These cartographies of struggle veer between the public and private realms. In her struggle against misogyny, Alice’s faith aggravated the harassment she faced, leading to a paradoxical exoticization of her body.

Growing up in Karachi’s French Colony meant that Alice Bhatti could not escape “having God shoved down her throat” (p.141). In a nation where the religious identities of minority communities come to encompass their social, cultural and political spheres, Alice could not afford the luxury of distancing herself from her faith. While repressing themselves in public spaces, the Catholic characters’ despair spills over in their private realms. Alice’s father, Joseph Bhatti, condemns the hypocrisy of the Muslas, while Dr. Pereira recalls an age when he held sway over them, lamenting the loss of his community’s authority through the years.

The political uncertainty plaguing the nation has proved detrimental for Christians and exacerbated following the launch of America’s Global War on Terror. Public anxiety has materialized in an ironic treatment of Christians as irrelevant, untouchable sweepers on the one hand, and confederates of the West on the other (Amjad-Ali, 2015, p.21). The varying political and economic climate devitalized Catholic symbols and institutions as well. The nationalization of Catholic schools and hospitals encouraged dilution of their religious character. In the novel, the wooden cross at the gate of the Sacred Heart hospital was left unrepaired, “in the hope that people will forget that it’s a Catholic establishment” (p.4). Hanif acknowledges and mocks the McDonaldization of religion, or the “Church food chain” culture, which leaves religious practices and symbols naked for market forces to prey on (p.70). Amidst these fragmentations of religion, Alice and her father find themselves straddling between embracing spiritual forms of faith and retaining ecclesiastical traditions.

Casteist practices served to intensify this internal dilemma. Sardonic patronization from their Christian brethren had joined forces with the prevalent oppression at the hands of Muslas. Frequently derogated as ‘choohras’, the Bhattis resided in a slum in Karachi among other members of their community. This urban ghetto, French Colony, is often mocked by several characters, including Alice herself, for its filthy nature despite its large population of sanitation workers. Such an essentialization of the country’s lower caste Christians as sweepers has isolated them socially, economically and politically. This state of affairs was reflected in a statement made by a prominent Pakistani politician, Pervez Khattak, proclaiming that only “non-Muslims will be recruited as sweepers” in his province (Singha, 2015, p.61). Upward mobility in the occupational hierarchy is ineffectual in ridding Dalit Christians of these typecasts. A nursing career or an inter-religious marriage cannot rid Alice of French Colony’s stench.

State institutions are the forebearers of societal prejudices, incessantly molding the characters’ lives. Ill-equipped surgeons, ignorant lawyers and a bungled judiciary smothered in red tape result in Alice being convicted for medical malpractice. Law enforcement too suffers from this malady, pinning accusations at whim and reducing the accused to animal status. Teddy Butt’s experience as a member of the nefarious Gentlemen’s Squad sheds insight on the interplay between vigilantism and bureaucracy and the coercions of toxic masculinity within the police force. However, these shortcomings pale in comparison to the deadly chaos of the hospital. The Sacred Heart Hospital for All Ailments is a pathetic slaughterhouse whose delivery room is deemed a gambling den where everyone comes out a loser (p.229). The calamitous hospital is a microcosm for the nation. The state’s incapacities and animosities are reflected in the hierarchies and functioning of the hospital. Class conflict, religious bigotry and casteism pervade the hospital atmosphere, demonstrating the ill-health of the nation. The hospital, while claiming to be a public welfare institution, serves the needs of the bourgeoisie, and is ridden with corruption and ineptitude.

Hanif’s stupendous creation does not confine itself to criticisms of national affairs. Instead, it is woven with acts of resistance and survival. Alice’s strike against her assaulter, her physical attack on the surgeon who framed her for malpractice and armed battle in defense of her religious beliefs reject assumptions that picture her as a meek, inconsequential nurse. Expanding modes of subaltern resistance beyond physicality, Mirza also points toward Alice’s attempts to surpass her economic and religious subaltern positioning through calculated moves for career advancement (Mirza, 2015, p. 154). Her father, on the other hand, brazenly celebrates his marginality, maintaining the “swagger of a choohra”, the author’s ode to black resistance and its inspiration to Dalit struggle. Countering proselytization, he retaliates, “If I am going to be called a bhangi all my life, I might as well have some bhang” (p.74).

However, all these resilient ventures are overshadowed by the miracle-working abilities Hanif blesses the Bhatti duo with.

French Colony has a history of producing idiot-saints every few years and Joseph Bhatti deemed to be this era’s addition. His supernatural power to heal stomach ulcers lends him the occasional social advantage. Alice’s ability to forecast deaths and her miracle revival of a stillborn also attract attention but are passed off by her as prosaic incidents. The book culminates in Joseph Bhatti’s open letter to The Vatican, making a case for his daughter’s sainthood. Alice Bhatti, attacked with acid by Teddy Butt, had ascended to Heaven with an apparition of the Holy Virgin, who sat on a hovering silver throne, held by peacocks and surrounded by a flock of kites. The letter is a heartfelt attempt of a father to ensure justice and recognition for his daughter, taking jibes at the casteist biases of the Committee which failed to bestow sainthood on a choohra and remain devoted to the Hindu Goddess Kali by refusing to recognize all of Yassoo’s children as equals. Hanif contests notions of a single real by choosing to incorporate the fantastic within his social realist writing (McLain, 2001, p. 141). This incorporation allows him to preclude pity for the subaltern and enhance his satirical critique of society by challenging the inevitability of subaltern death in fiction (Mirza, 2015, p.159).

Our Lady of Alice Bhatti is a groundbreaking work, compassionate and profound in its portrayal of seemingly ordinary Pakistani lives, setting itself apart from the author’s other explicitly political works. It juggles with weighty themes of male domination, religious minority experiences and caste prejudices with an air of lightness, skillfully suffusing them into mundane encounters. Lending itself to diverse analyses, the book stands apart from standard contemporary fiction by depicting Pakistan from within, avoiding engagement with the dogmatic outlook of the West. Standard themes of Islamophobia, terrorism and autocracy that crowd Pakistani settings are eschewed. Hanif’s endearment for his characters is exuded through his words which construct intimate relationships between us by immersing us within their lives. Hanif spins an exquisite tale, convincing our hearts to accept Alice as Our Lady of Alice Bhatti.

[1] Charya is a derisive, colloquial term for the Hospital’s Centre for Mental and Psychological Diseases, alluding to the madness that pervades it.

Amjad-Ali, Charles. (2015). From Dislocation to Dislocation: The Experience of the Christian Community in Pakistan. International Review of Modern Sociology, 41(1), 1-28.

McLain, Karline. (2001). The Fantastic as Frontier: Realism, the Fantastic, and Transgression in Mid-Twentieth Century Urdu Fiction. The Annual of Urdu Studies, 16 (1), 139-165.