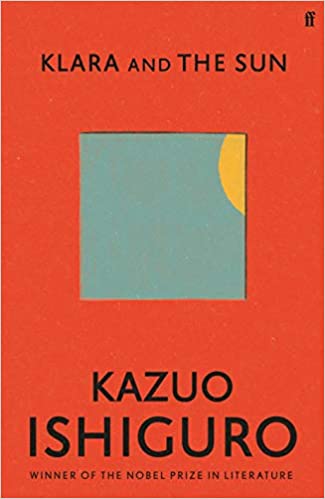 Simone Weil called attention the purest form of generosity. In Kazuo Ishiguro’s latest novel attention is also the language of love, albeit one generated by the algorithmic codes of artificial intelligence.

Klara and The Sun (Alfred A. Knopf, 2021) is a love story. In many ways akin to a traditional romance plot, it comprises an unlikely attraction, a mutually transformative companionship, a trial demanding personal sacrifice, and a resolution, in this case one marked by the tragedy of inevitability. But in other ways this romance narrative is permeated by the dystopian possibilities of a posthuman future in which human consciousness can be “downloaded” and human life, emotions, relationships, and capabilities are potentially quantifiable and endlessly replicable as lines of code.

Set in an America of the future, in a technologically augmented but deeply divided landscape startlingly similar to our own, the novel unfolds as a first-person retrospective account by Klara, an AI robot, during her final days in a scrapyard. The role that Klara and other prototypes like her are required to perform is that of an AF or “Artificial Friend,” a compliant and skilled companion who doubles up as caregiver, surveillance technology, and task manager. Engineered as productivity enhancing devices for young children, especially catering to those children who have been genetically modified or “lifted” to demonstrate superior cognitive capabilities, the AF represents both a peak of technological innovation as well as the ironically dark underside of progress. But there is no dramatic urgency or doomsday rhetoric in Ishiguro’s depiction of this futuristic scenario. Instead, there is a graduated, almost piecemeal unfolding of the complex dynamics of the technologically mediated topography that Klara and her human friend Josie inhabit.

The gentleness of this narrative pace is intended to reflect the robot’s nonhuman point of view, her particular electronic manner of processing information, and in that sense serves as a narrative replication of the algorithmic mode. Ishiguro’s novel seeks to embody a story engendered by code rather than textual script, by electronic data rather than neural synapses. However, Ishiguro’s choice of this peculiar method of building and revealing the elements of his plot offers slowness as an alternative to the neoliberal cult of instantaneity and speed. Reminiscent of Joseph Conrad’s use of the technique of “delayed decoding,” Klara and The Sun plays with how facts and connections are relayed. It delays, fragments, withholds, and disorders information in order to challenge coherence, chronology, and consistency as privileged modes of constructing a stable truth.

From the opening tableau of a segment of a street seen from the window of a shop, the novel tantalizes us with this play of partial views. This is of course in keeping with the ‘subjectivity’ of the robot herself, with the way in which things appear to the AF’s circuitry. We are told at the beginning that Klara differs from the other AFs by virtue of her exceptional observational abilities. This keenness of perception is literalized as a constant engagement with reality by breaking it down and rendering it into rudimentary components – physical dimensions, facial expressions, bodily postures, gestural cues. Klara’s vision of the world turns it into a fractal geometry which in turn makes the reader rethink the usual and the taken for granted. Figures, places, and environments are decoded as arrangements of “boxes,” gridded reconstruction of material reality that serve as reflections of Klara’s ‘mood’ or indicate the emotional and social mood of the external world. Her radically attentive attunement to the plural and contradictory texture of reality becomes the source of an alien empathy. Klara’s X-Ray vision in its capacity to penetrate into and refract the seemingly stable surfaces of things, defamiliarizes the everyday and exposes its underlying rifts. This is where Ishiguro provides us with a novel paradigm within which to reframe and complicate traditional dichotomies between reason and emotion, logic and affect, intelligence and intuition, and ultimately human and machine. Logic and observation are not, as the novel understands these, antithetical to empathy and emotion and instead engender new forms of intuitive appreciation of others. As Klara presciently protests: “I believe I have many feelings. The more I observe, the more feelings become available to me.”

Klara is programmed to resemble a human young adult, but what is supposed to distinguish her from her human counterpart is her seeming inability to feel complex emotions, her lack of access as Josie’s father says, to the impulses and desires of a human heart. Yet the central conceit of the novel is to stage the potential unravelling of this thesis and explore in so doing, the question of what constitutes the human heart, and by extension, the essence of being human. Klara and Josie are mirror images, one a feat of AI engineering, the other a product of genetic modification. Within the speculative universe of Ishiguro’s novel, for both Josie and her AF, humanity as a horizon of perfectibility, a limitless capacity for improvement, serves as an abstract ideal (rather than a concrete set of attributes) to be mimetically embodied via various scientific modifications of sentient and expressive matter, be it digital code or chromosomal data. However, as the novel progresses the core of humanity shifts elsewhere, to capacities for undivided attention and personal sacrifice, and to the cultivation of forms of resilience and autonomy within heavily mediated, socially stratified contexts demanding uniformity.

The narrative is in no rush to bring us to this denouement and like a slow symphony takes us through Klara’s induction into the brave new world of AI friends, ‘lifted’ children, secluded childhoods, online learning, technological imperialism, rising unemployment, and the ever-present horizon, like in Ishiguro’s earlier Never Let Me Go, of the substitutability and disposability of human life in the wake of various biopolitical techniques like cloning. Klara’s superior observational skills and her commitment to learning everything in clinically precise detail is also what becomes the basis of complex emotions in her, but from which a sense of self is visibly removed. Without an anthropocentric self to lay claim or refer back to, Klara’s identity as Josie’s AF is fluid and malleable. The cognitive codes and mechanisms that enable her to assess, understand, and judge the affairs of the human world shift in relation to the revelation of new facts or developments in Josie’s personality and environment. It is this access to the other’s particular way of being in the world, her desires, impulses, and predilections, without the mediating pressures of an egoistic selfhood that becomes, according to the novel, the source of the machine’s radical empathy. This is also the point at which extreme technical sophistication effortlessly translates into magical thinking.

One of the first “lessons” that Klara learns is the ubiquity of contradictions, the fundamental basis of relativism upon which human existence differs from its robotic counterpart. The coexistence of multiple emotions, disparate loyalties, and divided interests – this is what fascinates the AF and becomes her special point of reflective interest. The novel takes us through the robot’s visor where social spaces are scanned in terms of underlying conflicts, insecurities, and competing interests. During a peer group meeting, for instance, Klara has to negotiate the complex topography of psychic plasticity, watching Josie change, shift her loyalties and modify her usual behaviour. The layers of human sociality, the multidimensionality of human interaction, and forms of paradoxical, counterfactual, speculative, and figurative expression are areas outside the humanoid’s rationality. Yet it is in gradually learning the existence of non-linear, digressive, and oblique modes of thinking, in her departure from the logic of her programming, as Josie’s health begins to fail and the neat margins of predetermined plans begin to fray and unravel, that Klara’s consciousness begins to dissolve the boundaries between human and machine. We see her approaching a version of autonomy in the gap that opens up between her imitative capacities and the new ability that emerges out of it to envision possible worlds.

In the climax of the novel, Ishiguro shows us an AI powered robot engaged in forms of magical and animistic thinking, attributing to the sun and the solar power that fuels her, sentience and therapeutic power: a thought that would ironically have no credibility in the world of human reason. For the robot without an anthropocentric core and its attendant speciestic sense of human exceptionalism and superiority, natural and cultural, animate and inanimate, organic and inorganic occupy positions that are equivocal rather than polarised. Some of the most powerfully and sensitively written parts of the novel involve Klara’s visit to a nearby abandoned barn for her private rendezvous with the sun. Brought to the limits of her abilities and endurance by her quest through a terrain unsuited for robots, Klara undergoes a transformation inside the barn, exposed for the first time to a world of objects that are dissociated from the hi-tech and data saturated spaces occupied by humans. In this near primordial zone of desertion and abandonment, a literal twilight zone where the rays of the setting sun come to rest on a scene of obsolescence and residual time, we encounter the novel’s democratic vision. Klara reconceptualises the solar principle through rubrics of sacrifice, aid, caregiving, hospitality, and charity. No longer a source of inexhaustible energy to be consumed to serve anthropogenic industrial ends, and no longer associated thus with capitalist civilizational paradigms of unmitigated progress and upward mobility, the solar economy in Klara’s engagement with the sun through direct address, negotiation, and prayer infuses the field of energy-as-consumption with an ecological principle of mutual entanglement in networks of shared vulnerability. Klara’s sacrificial bargain with the sun moves us away from exploitative models of capitalist extraction to forms of symbiotic and sympathetic co-participation in sustaining life and healing.

Ishiguro’s post-Nobel novel continues some of his earlier themes. The narrative itself progresses in a manner similar to The Remains of The Day not from a position of omniscience but from the partial perspective of limited knowledge and outsiderness. The reader witnesses with the AF’s socially uninitiated algorithmic cognition, participating in her wonder and confusion, labouring to decipher the workings of an unfamiliar world. Like in his epochal Never Let Me Go, the question of human singularity in a posthuman landscape is taken up, although the potential resolution offered by Klara and Sun’s gentler approach locates the source of individual authenticity outside the conceptual matrix of personhood in the affective attitudes of those that the self comes into contact with. Rather than usurping the place of the perishable human, Klara uses her own uniqueness to create an assemblage with other nonhuman bodies as a means to address a human dilemma. Ishiguro’s view of the AI powered machine is a compassionate one. Eschewing stereotypes of technological domination and human-machine antagonism, Klara and The Sun offers a tender portrait of what it is to be human, even if the humanity in question is that of a robot.

Bio:
Paromita Patranobish is an academic based in New Delhi. She has a PhD in Modernist literature with a focus on nonhuman embodiment in works of Virginia Woolf. She has taught at Shiv Nadar University, Daulat Ram College, and Ambedkar University Delhi.